The Asian Dub Foundation celebrates cultural diversity and adventurously mixes different genres and creates heterogeneous music that can be compared to the melting pot of London. With the new tracks added, their updated ninth album rounds up topics that affect the world on a global and personal level – from addressing the message of climate change to taking an ironic stance in response to Brexit. Access Denied is provocative, but much more than rebellious talk. Embroidered with various elements, its comprehensive texture is a patchwork of sounds that allude to different episodes of music history.

The album was originally released in September last year and brought a weird twist to the confusing and uncomfortable Brexit reality. With a sketch by British comedian Stewart Lee, Coming Over Here took over the British sales charts in the first few weeks after the transition period. "Working on this track felt therapeutic," admits Steve Chandra Savale of the Asian Dub Foundation. The remix version of the song is one of the five new compositions of the deluxe reissue. It delves a little deeper into the chronology of global migration portrayed in the sketch and pokes fun at one of the speeches made by Paul Nuttall, a former leader of the British Independence Party. 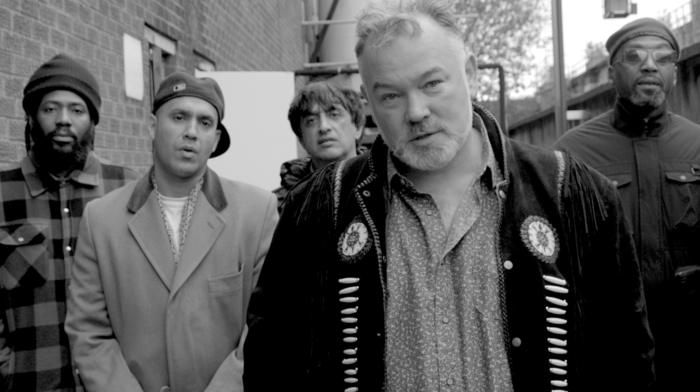 LTW: The new version of Coming Over Here has a slightly darker, eerie sound. Were there any pictures behind it?

Steve Chandra Savale: I had this idea of ​​Neolithic people stomping around. Stewart Lee said to me when he heard the track, "It's like a stoner rock track with a Spinal Tap Stonehenge thing". Nathan (Nathan Flutebox Lee – editor's note) came and played a tailor-made flute solo for it. It sounds really primitive.

LTW: Did you follow Stewart Lee before he and the band started working together on this track?

SCV: Not particularly, that's another fun thing. I mean comedy, British comedy has a huge audience in this country. But that hasn't really interested me in the last ten years. And I don't know any people who followed that either. There have been some second and third hand contacts – people who said, "My brother is a huge fan of his," but are not necessarily familiar with his comedy. As a band, we didn't have much contact with the comedy world anyway. But many of us knew this sketch. It's a sketch that came into our world. I don't think Stewart even knew how powerful it was for people like us to hear that. Coming here is something we grew up with. It's something we remember. It's more powerful than he thought. It was a slight extension of the logic of Paul Nuttall, leader of the UK Independence Party. Just expand the logic of anti-immigration politicians and you get a brilliant comedy sketch. Other than this, I know a lot more about Stewart Lee.

Where did the idea to work on this particular sketch come from?

There was a trigger. Because it came down to a festival that Stewart Lee did a lot for. He was making a documentary about one of John Peel's most popular groups called The Nightingales, strangely enough, I knew some of the members when I lived in Birmingham so he came up with something about it. I saw him there and that reminded me of the sketch he had made. I listened to it while I was working on the music. I literally just played the sketch while working on the track. It was a moment of inspiration with no real purpose other than seeing what it would be like.

Both new versions of Coming Over Here and Kursk Down have that distinctive sound, as if the music was being heard from the bottom of the sea.

Well you are on the right track. When I did the drum loop for Kursk Down, it had that submarine feel. The melody was inspired by a choral singing that could be heard in a Russian Orthodox church. After all, we debuted this track two years ago during a gig in an old Soviet shipyard in Estonia. Kursk Down is very location-specific, I don't think we've ever done that before.

The new versions of Kursk Down and Hovering Shadows were produced by Adrian Sherwood, who is of course a legend in the dub scene. ADF has a history of working with Adrian. Has the work process been organized in a certain way?

We did it in the style that he made records and is still doing. He gets a number of live musicians and then synchronizes them live. And that would be an album. Basically we just played a special gig for that at Ramsgate Music Hall, which has become a pretty prestigious venue in the UK. It's pretty small, but it's an amazing little place. Adrian built a sound system because he lives there. We went and played the entire instrumental set there. So Hovering Shadows and Kursk Down are live tracks that were mixed by Adrian, with a few small adjustments by me. There aren't a lot of drums and beats on it, almost classic live dub. We were pretty happy with the way it turned out.

One of the bonus tracks could have been expected to comment on the current pandemic situation among other serious topics, but this topic is not mentioned. Was it deliberately omitted?

There's a line on the track, Stealing the Future, that mentions the spread of infection, but it's not intended. I just wonder how effective the comment on this would be. I would probably write from my own experience – I haven't really thought about that. We're actually writing a lot of new material at the moment, but funnily enough, the pandemic topic isn't at all. There's a new track called Polarizing that may have a different title at some point, but it relates to the point of polarizing ideas. Society is no longer as homogeneous as it used to be. It's defined by ideas. There is also a complicated controversy surrounding the pandemic.

What do you think of the anti-lockdown protests that recently took place in the UK?

For many people, the lockdown feels like something the government uses to control them. Especially for those with a tendency towards a conspiracy mentality. I had a debate with a friend of mine and we both concluded that the lockdown protests were the result of incompetence, inconsistency and disagreement about how to respond to the pandemic. If the government were organized and actually cared about the people, there would be little or nothing like mixed messages and hypocrisy that made people take to the streets. Although I sympathize with the spirit, I think it is misguided too. It is better to be safe than sorry. I don't think it's bad to wear a mask.

All words of Irina Shtreis. You can find more texts by Irina in the archive of her author.

Southern Avenue publicizes “Be The Love You Need”

Three model new songs for people with an eclectic style in...